YouTube often runs in the background when I am on the computer. Every once in a while I stumble across antenna construction videos that make me go “well, that’s just too easy to not try”. Dave Taddock, KG0ZZ, has a series of YouTube videos which talk about different ways to turn scrap into an antenna. One of these videos, the 10/11m ground plane antenna looked like a good one-day antenna build which would produce a great antenna for field operations.

The radiating element is ~8ft4in of aluminum tubing fed directly from an SO239 connector. Two pieces were used so that I could telescope it in order to tune it for different parts of the band. This was done by cutting teeth into one of the tube and adding a hose clamp to keep it taught. The ground, at least in my build, is 6 radials of the same length. The radiating element and the earth are separated by PVC. The mount is from the feed point of an old yagi which was scrapped by the Coquitlam club. For some reason I spared the unit on clean up date and it has now become useful.

The antenna photo, taken at dusk, can be seen below. I will provide better snaps shots later on, but for now, this should do.

Dave’s article, and the aformentioned YouTube video are on his webpage at http://www.amateurradio.bz/10-11m_ground_plane_antenna.html

I set the unit up and plugged in a radio before even tuning it. I spun the dial around and was a little bit disappointed. As for band conditions, there was not a peep on the band other than a beacon which was barely there. I rolled the VFO over to 20 meters and found it was hopping with activity – a good sign. The antenna was not cut for 20 so I didn’t bother trying to raise a contact at the risk of the finals. With the radio back on 10 meters and the power backed off I tuned around the band. It was about 1.5:1 on the majority of the band with a preference for the lower portion where it dropped until I hit the band edge. I slid the inner tube down a few inches to bring the SWR to 1.1:1 and the beacon came up enough to move the S-meter. I brought the power back up and tested transmitting – pop – the radio rebooted. Not enough power. Resolving to just RX for now I swept the band and found activity at 28.690. It soon became apparent they were holding a net, and taking check ins. These guys were all local to me, within 30kms, so most where loud. I tried to call on the next call but the radio dropped out again, I had to start the truck and try again. About 9 S-Units of ignition noise greeted me at the radio.

The video is not great, but it shows the noise, the net, and the antenna (sort of), and my legs…The radio is borrowed courtesy of the Coquitlam radio club.

Thank you for reading this! Cheers,

I had success creating a Digi/I-Gate with the TNC-X and a old used laptop. I wanted to install a few more, but did not have any more spare machines with low power draw (due to inverters used at repeater sites) so I figured I would try the TNC-Pi to do the same thing. John from Coastal Chipworks has created an excellent product, and has been great to deal with (especially his prompt shipping which was around the time the podcast HamNation was suggesting it’s users to purchase it as well for their Smoke and Solder segment on the show).

There are now 6 of these units burning in on my desk. Here is how I built all 6 of them:

Here are my steps for setting up the Pi once the TNC-Pi is built and mounted to the Pi. At this time it is not imperative that you have the radio interfaced to the TNC-Pi, but it will make it easier to test.

Next, edit the inittab file in the /etc directory and remove the line that says:
T0:23:respawn:/sbin/getty –L ttyAMA0 115200 vt100
You will find it at the very bottom of the config file, or at least I did in my Raspbian installs.

Next, you can run the easy config script to set up your pi…

The raspi-config is a script used to correct the time zone, remove the auto-desktop start, an update, and a few other small things as you may wish. I recommend changing the hostname (under advanced) in order to make it unique. In my case, I use the callsign used by the modem. Either now, or once complete, change the password for the user “pi” to something other than “raspberry”. Your changes are effective immediately. Exit the tool once you are comfortable with the settings, then reboot your pi, and continue.

Move the config file to a new location.

You will need to edit the APRX config to your liking. You can see my example config here. I highly suggest that you read up on all the very interesting things you can do. I am hoping to add a temperature sensor to the telemetry portion by creating packets with a perl script. These crafted KISS frames will be read and broadcast by the aprx application if configured correctly.

If you are planning to use this as a digi; When creating your config I plead with you, please use viscous-delay feature. This setting alone will greatly delay the over saturation on the 2 meter APRS frequency we use.  If you are just operating as a fill-in digipeater this setting is most powerful as it will listen for the delay period (say 5s) for any packets being digi’s that match the last one heard. If it hears another station has digi’d the packet, then it is dropped from the buffer and not sent to the radio, instead it is sent only to APRS-IS (if you have it configured to do so).

Read more about the power of APRX at http://wiki.ham.fi/Aprx.en and specifically about viscous delay here.

HELPFUL LINK: The password for the APRS-IS server was gathered here: http://apps.magicbug.co.uk/passcode/

Third step, Starting up on boot.

Create an aprx bash script to start and stop as desired…This will be used during bootup too.

I later modified mine with a restart option by separating a stop and a start with a 5sec sleep timer. NOTE: Be careful copying the script above as some browsers render the quotation marks as periods, so make sure that before you save the file you replace the periods with quotation marks as needed.

To test APRX, it’s config, and to understand what is happening, I suggest this command

Things I learned…If you get this error when running the software, you may need to reboot or ensure that you have followed the two steps that involve cmdline.txt and inittab

If you have any questions, Issues, or whichever let me know. I can be emailed at <mycallsign>@<mycallsign>.ca and will happily provide any feedback.

The next step is to interface your radio to your TNC-Pi. Good luck!

A while back I installed QSNL39, a fill-in digipeater operating in Quesnel BC in 144.390Mhz. Due to it’s location it fills in the bowl very well, however it is not heard well (unknown why) by the Milburn Mountain machine.

I am now prepping a spare old laptop (using this as it comes with a built in UPS). I am adding the APRX software as it is a nice light weight linux digi that interfaces nicely with KISS TNCs. Currently the TNC-X I am using has a X-Digi Daughter board which is controlling the TNC, and I am unsure if I will continue to use it, or have the APRX software do all the controlling for. At this point, I expect I will be removing the board.

From here, I edited a few lines of config to suit my install

Next, I saved the config and restarted the process as follows:

Next, I checked ARPS.fi to ensure that it was there, and sure enough, after about 20 seconds it appeared.

Once I have the unit installed I will be able to publish more information. I am excited to have this running and can not wait to see it in action.

I worked the 6 meter band as VE7WNK/VE6 and the first day I made a whopping 1 contact. See the spot from vhfdx.info’s spot-mapping

More to come…Headed from DO13 to CO82 in the morning… I hope to have an entry into the VHF contest this up coming weekend, however there is a wedding that will be in the way of my prime operating time…. -.-

I watched a YouTube video by Randy, K7AGE, where he talked about building a 6 meter dipole. This super simple antenna is so easy that I would have to find an excuse to NOT make it. Randy’s video (and many others on the net) made me want to try it out and I wanted to play on “the magic” band. After a few minutes of thinking I jumped in with two feet and started looking for 6 meter yagi antenna designs. I stumbled onto the YU7EF EF0604s antenna.

This antenna is a simple 4 element beam that is relatively compact, the longest element is just over 9ft and the boom is only 8ft! I started off wanting to make this antenna portable, however after drawing up the design I visited my favorite metal retailer for some aluminum tubing and discovered that they did not carry the sizes that I needed to make the elements telescopic. I ended up settling on single lengths of 3/4inch aluminum tubing with 1/16th inch walls for the elements. The boom is an 8ft piece of 1inch square aluminum tubing. The elements are held to the beam using hydraulic hose clamps. The boom is mounted to a pole using a pair of pipe/exhaust clamps which are bolted to a 4inch square plate of 1/8th inch think aluminum. 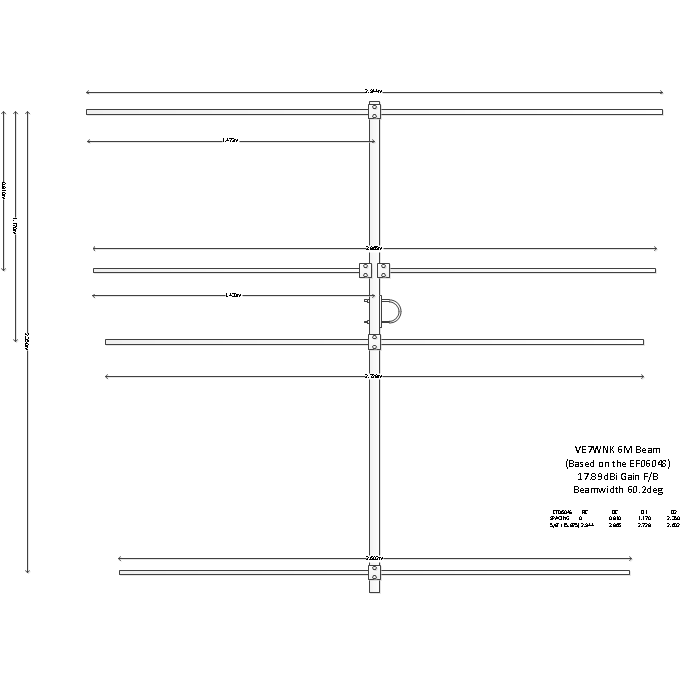 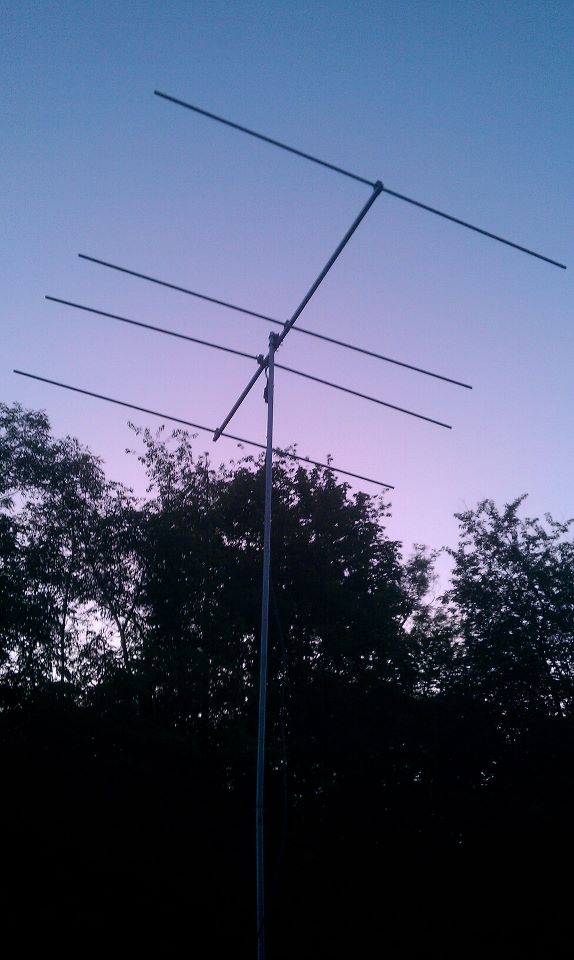 With Picasa plugin by Wott